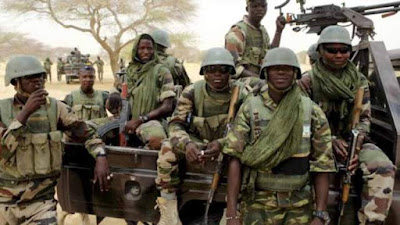 The Defence Headquarters has dismissed the claim by Boko Haram terrorists that the recent massacre of rice farmers in Borno was retaliation for the arrest of one of them.

The Coordinator, Defence Media Operations, Maj.-Gen. John Enenche, said this while giving an update on the operations of the armed forces between November 26 and December 2 on Thursday in Abuja.

The terrorist group had on Tuesday released a video claiming that the terrorists carried out the massacre in retaliation for the arrest of one of them by the farmers.

They also claimed that the farmers had also given information on their movement in the area to the military.


Enenche said the claim was the practice of the sect with the sole motive of instigating fear in the minds of the people to discourage them from cooperating with the security agencies.

He said that the information received by the military from one of the survivors revealed that the farmers were called for a meeting with the terrorists on the sad day before they were slaughtered.

“The truth is that whenever they are losing ground as a result of the military activities, this is what they resort to.

“It is a fallacy because we killed one of them and that the farmers gave information about them, but the likelihood is wickedness.

“They want to use that to instill fear in the minds of the people because they have seen the governor trying to make sure that people return to their homes,” he said.