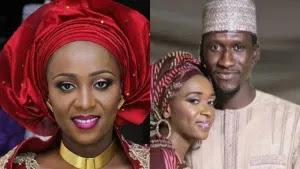 The Court of Appeal in Abuja, on Friday, upheld the conviction and death sentence that was handed to Maryam Sanda, daughter-inlaw to a former Chairman of the Peoples Democratic Party, PDP, Mr Mohammed Bello Haliru.

The appellate court, in a unanimous judgement by a three-man panel of Justices led by Justice Stephen Adah, said it found no reason to set aside the verdict of a High Court of the Federal Capital Territory, which okayed Maryam to die by hanging.

It held that the 20 grounds of appeal Maryam filed to challenge her conviction and sentence lacked merit and deserved to be dismissed.

Maryam, who was on January 27, found guilty of stabbing her husband, Bilyamin Bello, a real estate developer to death at their Abuja residence in 2017, had in her appeal, maintained that she was denied fair hearing by the trial court.

She accused the trial Judge, Justice Yusuf Halilu of bias, insisting that he relied on circumstantial and hearsay evidence, to sentence her to death.

The convict told the appellate court that there was lack of confessional statement, absence of murder weapon, lack of corroboration of evidence by two witnesses and lack of autopsy report to determine the true cause of her husband’s death.

Insisting that the trial court’s judgment occasioned a grave miscarriage of justice against her, Maryam, begged the appellate court to discharge and acquit her of the culpable homicide charge that led to her conviction.

She argued that the failure of the trial judge to rule on a preliminary objection she filed to challenge the charge against her and jurisdiction of the court to entertain same based on evidence of bias and lack of fair hearing she raised, rendered the judgement a nullity.

According to her, “the trial judge erred in law when having taken arguments on her preliminary objection to the validity of the charge on the 19th of March, 2018 failed to rule on it at the conclusion of the trial or at any other time.”

Besides, she alleged that the Judge erred and misdirected himself by usurping the role of the police when he assumed the duty of an Investigating Police Officer (IPO).

She quoted the trial Judge to have said: “I wish to state that I have a duty thrust upon me to investigate and discover what will satisfy the interest and demands of justice.”

Maryam, through her lawyer, Mr J. K. Gadazama, SAN, maintained that the trial judge failed to restrict himself to the evidence that was adduced before the court.

“The court’s usurpation of the duty of the police by taking it upon itself to investigate and discover negatively coloured its assessment of the available evidence and resulted in it reaching an unjust decision contrary to the evidence before it”, she argued.

She prayed the appellate court to set aside her conviction and the sentence imposed by the high court Judge and acquit her of the charge.

However, the appellate court, in the lead judgement that was delivered by Justice Adah, said it was not in doubt that the appellant killed her husband.

The appellate court, however, faulted the trial court judge for his failure to rule on Maryam’s preliminary objection before he delivered final judgement in the matter.

It, therefore, invoked its powers under section 6(6) (a) of the 1999 Constitution, as amended, and dismissed Maryam’s pending preliminary objection for want of merit.

The court held that the trial judge was right in his verdict, stressing that the offence of culpable homicide committed by the appellant, is punishable by death under section 221 of the Penal Code.

The court noted that there was evidence that the appellate murdered her husband during a fight that ensued after she saw a nude picture of a girl on his phone.

The trial court had based its judgement on circumstantial evidence before it, Maryam’s testimony during the trial and her statement before the police, which it said established that she fatally stabbed her husband to death in Abuja on November 19, 2017.

The court ordered that the convict should remain at the Correctional Center in Suleja till she exhausts her right of appeal.

Police had in the charge marked CR/15/17 which it filed pursuant to section 109(d) of the Administration of Criminal Justice Act, 2015, alleged that Maryam stabbed her husband to death with a broken bottle, at their Abuja residence.

The prosecution told the court that Bilyamin died as a result of several stabs on his chest and neck.

Police maintained that the defendant attacked her husband with the knowledge that her act was likely to cause his death.

She was equally charged with the offence of “causing grievous hurt”, contrary to section 247 of the Penal Code Law.

Though Maryam’s mother, Maimuna Aliyu, her brother, Aliyu Sanda and one Sadiya Aminu, were initially charged as co-defendant in the matter, they were later discharged by the court.

The prosecution had alleged that Maryam’s family members attempted to destroy evidence that linked her to the murder.

Maryam who is the mother of two had in her testimony during the trial, denied the allegation that she killed her husband.

She claimed that her husband slipped and fell to a broken Shisha pot.