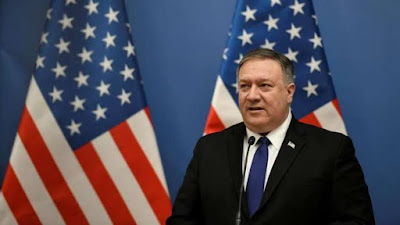 The United States on Friday imposed new sanctions on Chinese officials for allegedly participating in coercive influence activities around the world.

In a statement, US Secretary of State Mike Pompeo announced new visa restrictions on Chinese officials who have engaged in a variety of activities, from physical violence to espionage, to exert influence outside of China’s borders.

“These malign activities are intended to co-opt and coerce subnational leaders, overseas Chinese communities, academia, and other civil society groups both in the United States and other countries in furtherance of the [Chinese Communist Party’s] authoritarian narratives and policy preferences,” Pompeo said.

The names of the individuals targeted by the new sanctions were not released. However, Pompeo said that the sanctions would extend to individuals active in United Front Work Department, an agency within the Chinese Communist Party known for carrying out influence operations abroad.

“The five programs in question are fully funded and operated by the [Chinese] government as soft power propaganda tools,” a Pompeo statement read.

“They provide carefully curated access to Chinese Communist Party officials, not to the Chinese people, who do not enjoy freedoms of speech and assembly.”

The Trump administration has been especially hawkish on China, and Director of National Intelligence John Ratcliffe recently published an opinion piece in the Wall Street Journal calling Beijing the “greatest threat to democracy and freedom world-wide since World War II.”

During a panel discussion at the Aspen Institute’s virtual Cyber Summit this week, director of the US National Counterintelligence and Security Center, Bill Evanina, said that China has already started targeting President-elect Joe Biden and his team.