#EndSARS: Nobody Died At Lekki, Those Who Claimed They Saw Copses Have Eye Problem- Buratai 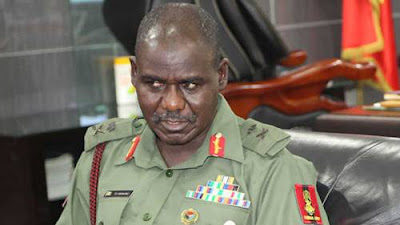 The Chief of Army Staff, Lt Gen Tukur Buratai, has insisted that nobody was killed during the #EndSARS protest at Lekki toll gate in Lagos State on October 20.

Buratai said those claiming protesters were killed were seeing “double.”

Hours before a curfew was scheduled to begin, soldiers had stormed the Lekki toll gate on October 20 where protesters had gathered and started shooting, killing an unconfirmed number of people.

The incident has received widespread condemnation within and outside Nigeria.


Speaking on Friday at the decoration of 39 newly promoted Major-Generals, Buratai maintained that there was no corpse during the shooting at the toll gate.

“I must say that the spiritual warfare seminar we had last time helped us during the last #EndSARS protest to the extent that there was no single corpse, but some persons saw double at Lekki toll gate in Lagos State.

“We will continue to protect every law-abiding Nigerian anywhere in the country, and we will do that in accordance with the rules of engagement and confines of the constitution.”

Despite Buratai’s self-righteous claims, the army has been giving self-indicting explanations before a sitting Lagos State Judicial Panel of Inquiry investigating the Lekki incident.

The army had initially explained that it used only blank ammunition at the scene of the protests, but following a CNN investigation which exposed that expended Serbian bullets purchased by the army were found at the location, the military gave another explanation.

The Commander of the 81 Military Intelligence Brigade, Victoria Island, Lagos, formerly Brig-Gen Ahmed Taiwo, had led the army’s desperate attempt to cover up its tracks.

Taiwo later explained on November 22 before the panel that the Phase Four of the military internal security operation, which was deployed at the Lekki tollgate on the night October 20, involved the use of both live and blank ammunition.

He said the soldiers took live bullets to the scene for self-defence.

Taiwo said the troops that operated at the tollgate on that night were indeed armed with live bullets. He, however, maintained that only soldiers with blank bullets fired shots into the air.