Three Inmates Who Escaped From Edo Prisons Rearrested For Robbery 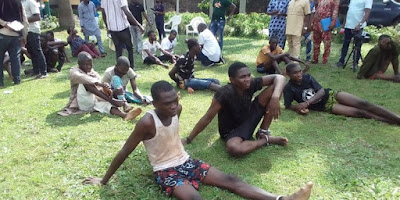 Three of the inmates who escaped in the jailbreak of two prisons in Edo after the ENDSARS protests turned violent have been rearrested for robbery.

The suspects, Osamuyi Omoregbe, Raymond Aimua and Omon Ayo, were among 34 suspects police paraded for armed robbery, kidnapping and cultism.

Operatives of the Edo state police command has rearrested three inmates who escaped from the two correctional centres in Edo following the attack on the centres by hoodlums during the #EndSARS protest over alleged armed robbery.

The state police commissioner Johnson Kokumon said the three escapees would be charged for escaping detention as well as the fresh crime committed.


He explained that the criminal elements now pretend to be taxi drivers and dispossess passengers of belongings in the process of conveying them to their destinations.

Kokumon said it is worrisome that about 2,000 criminal inmates escaped from the custodian centres into the city, assuring that the police will not rest until all are arrested and arm and ammunition carted away are recovered.