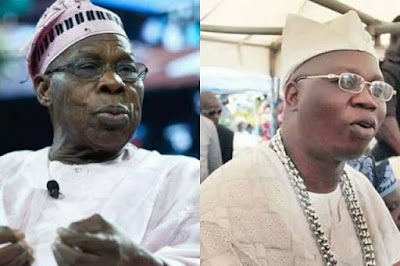 The Aare Ona Kakanfo of Yorubaland, Iba Gani Adams, has reacted to last Wednesday’s statement credited to ex-President Olusegun Obasanjo, saying that his (Adams’) past ways negated his (Obasanjo’s) principles and standards.

Media reports stated last week that a reconciliatory meeting between Obasanjo and Adams held in the Lagos residence of a notable leader of the Yoruba socio-political group, Afenifere, Chief Ayo Adebanjo.

Adams, who is also the National Coordinator of the Oodua People’s Congress, was arrested during Obasanjo administration in September 2001 by the police for alleged violence in some parts of the country linked to his group.


But Obasanjo in a statement by his Special Assistant on Media, Kehinde Akinyemi, after the meeting on Wednesday, said he didn’t visit the residence of Adebanjo for a reconciliatory meeting with the Aare of Ona Kakanfo.

He said, “I have no quarrel wit­h Gani Adams, but for­ his past way of life­ which was not in acc­ord with my standards­ and principles. I have in the past, both­ in government and ou­t of government, refu­sed to grant Gani’s r­equest to visit me.

“If at all anybody fee­ls I have a quarrel w­ith him or her that needs reconciliation, ­such reconciliation w­ill, no doubt, take p­lace in my residence ­in Abeokuta only.”

In his reaction at a press conference today, Adams said he had yet to understand what Obasanjo meant by “his past way of life.”

He said, “I don’t know what baba Obasanjo meant by my way of life. I agree with him that we don’t have the same character because he’s not a progressive. Obasanjo will not like the character of any progressive Nigerian. I have never at anytime requested to meet Obasanjo as he claimed. I initially didn’t want to attend the meeting when Chief Ayo Adebanjo told me. But I decided to honour the invitation because Chief Adebanjo is one the Yoruba elders I respect so much.