ASUU Strike: ''We Will Shut Down Private Universities If…'' – NANS President, Sunday Asefon 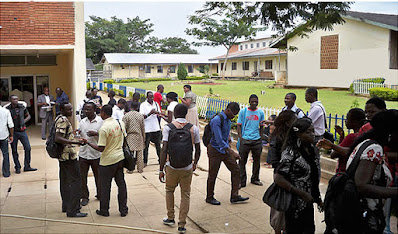 The newly elected president of the National Association of Nigerian Students (NANS), Sunday Asefon, has threatened to lead a shutdown of private universities in the country if the ongoing strike by lecturers in public universities is not resolved.

For nearly nine months, the Academic Staff Union of Universities (ASUU) has been at loggerheads with the federal government over non-payment of Earned Allowance, welfare of lecturers and the abysmal state of public institutions.

Several negotiations held ended in a deadlock until recently when the federal government promised to offset a large percentage of the Earned Allowance and release more funds for the schools. Yet, the response of the lecturers has not shown that resumption is in sight.


Speaking during a Facebook live session with Punch newspaper, Mr Asefon lamented the effect of the strike on students, particularly those whose house rent will be due in a couple of months and students’ entrepreneurs who eke out a living from selling on campuses.

“I was so baffled during my press conference. My position is that we are to engage the representatives of the federal government and leadership of ASUU to find a lasting solution to the strike.

“This is the longest strike in the history of ASUU strike. My administration, we frown at it. We’ll be meeting with them to see how the two of them can shift ground so that we can go back to school.

“ASUU must stop this strike. Federal government must listen to ASUU. The two of them must synergise. When two elephants fight, the grass that will be the one to suffer it.

“Our students that paid for house rent before the strike…By December, the house rent will expire. They will have to pay another one. We have students that engage in entrepreneurship to fund their studies. Those businesses have been shut down.”

When asked about the next step by the students’ body if the strike lingers the more, Mr Asefon said NANS will force both parties to reach a consensus.