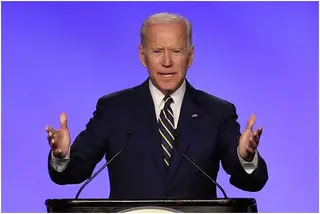 U.S. President-elect Joe Biden has reportedly said that the Republican Party “beat the living hell out of us” in the Nov. 3 election, due to calls by Democrats to defund the police.

Biden made the remarks in a leaked audio from a virtual meeting he had with a group of civil rights leaders on Thursday, according to Fox News.

The report did not say whether the former Vice-President meant losing the election or referring to the below-expectation performance of theDemocratic Party in the congressional polls.

The former Vice-President is the projected winner of the presidential election with 306 Electoral College votes against incumbent President Donald Trump’s 232.


Trump has refused to concede defeat and is currently challenging the election results in court over alleged widespread voter fraud.

Vice-President-elect Kamala Harris and prominent civil rights leaders like Derrick Johnson and Rev. Al Sharpton were said to be among the meeting attendees.

The outcome will determine the majority party in the next U.S. Senate.

Noting that Democrats had already been labelled as being “defund the police”, he warned that any policing reform initiated by his administration would be seen in that light.

“That’s how they beat the living hell out of us across the country, saying that we’re talking about defunding the police.

“We’re talking about putting more psychologists and psychiatrists on the telephones when the 911 calls come through.

“We’re talking about spending money to enable them to do their jobs better, not with more force, with less force and more understanding,” Biden was quoted as saying in the leaked audio.

Before the election, pollsters and Democratic Party leaders predicted what they termed a “blue wave” in the senatorial election.

But the party performed below expectation, and even lost several seats in the House of Representatives.

Former President Barack Obama and other prominent party leaders argued that calls to defund the police played into a Republican strategy to paint left-leaning candidates as radicals, according to Fox.