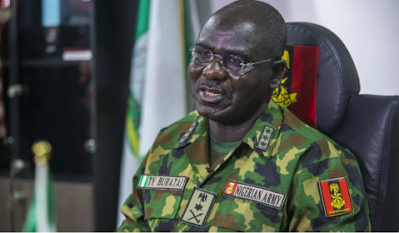 General Irefin reportedly died of Covid-19 complications, heightening fears that many senior officers who had contact with him might have contracted the disease.

The Army had earlier Thursday announced that a top officer had contracted the virus with credible sources in the military saying Gen. Irefin was the victim who later died in hospital.

There was no official confirmation on his death.


Late Irefin was among the top military officers comprising principal staff officers, GOCs, commandants of army schools, commanders of army operations and the Minister of Defence, Bashir Magashi that participated in the Chief of Army Staff Annual Conference 2020, in Abuja, which was abruptly cancelled when it was discovered that one of those in attendance had contracted COVID-19.

Besides cancelling the major event, Buratai had also asked all the guests invited for the wedding of his son not to attend, indicating that the event will be low key.

There has been a sharp rise in COVID-19 infections across the states with experts attributing the development to the nonchalant attitude of Nigerians.