Many Dead As Trucks Collide, Burst Into Flames In Ondo [Photos] 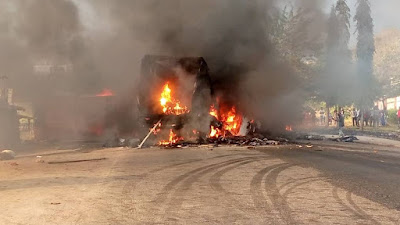 Tragedy struck on Friday evening in Ondo State following an accident which claimed about five lives along Ikare-Akoko/Owo highway.

The accident occurred in Akungba-Akoko, headquarters of Akoko South West Local Government Area of the state.

It was gathered that the accident which involved three trucks, happened at the Okerigbo Hill near the main gate of the Adekunle Ajasin University situated in the community.

One of the trucks, which was said to be loaded with bags of cement, suffered a brake failure while descending the hill from Ikare-Akoko end of the road.

Recall that six weeks ago, similar accident occurred when a truck which suffered break failure rammed into a market in the community, killing no fewer than 16 people and injured many residents of the town.

The cement-laden truck collided with the two other two trucks after losing control and it immediately caught fire and burnt the three trucks. According to an eyewitness, about five persons were feared dead as they were trapped in the fire while several people were injured.

The eyewitness added that while the trucks were burning for hours, there was heavy gridlock on the route as vehicles were forced to stop with no firefighting truck on sight. 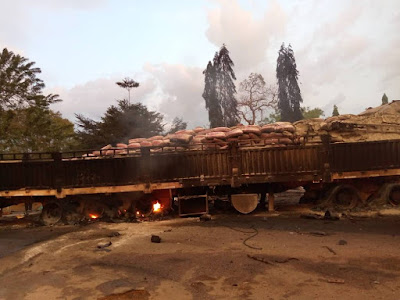 Confirming the accident, the Ikare Unit Commander of the Federal Road Safety Commission, FRSC, Kabir Mohammed, said the cause of the accident was yet to be ascertained as at press time