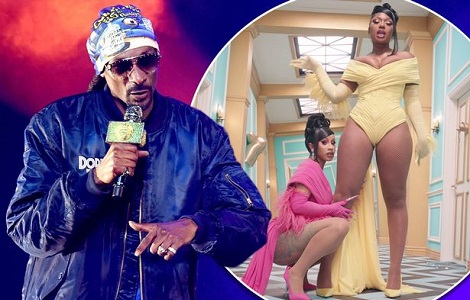 Snoop Dogg has taken aim at Cardi B and Meggan Thee Stallion's controversial hit single WAP and told the pair to "slow down".

The legendary rapper, 49, raised concerns about what he called a lack of 'privacy and intimacy' in the sexually charged lyrics.

During an interview with Julissa Bermudez for Central Ave Snoop praised Cardi and collabrotor Megan Thee Stallion for expressing themselves - but raised concerns about the impression their music could have on younger women when it comes to their bodies and sexuality.

The veteran rapper, 49, warned: “Oh my God. Slow down. Like, slow down. And let’s have some imagination.


“Let’s have some, you know, privacy, some intimacy where he wants to find out as opposed to you telling him.

“That should be a woman’s prized possession. That’s your jewel of the Nile.

"That’s what you should hold on to. That should be a possession that no one gets to know about until they know about it,” Snoop added.