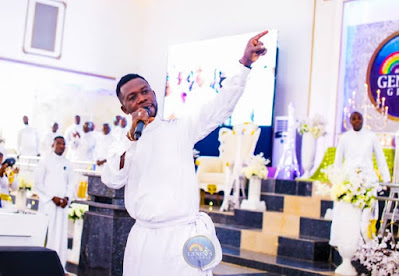 Justice Olabisi Akinlade of an Ikeja High Court on Tuesday refused the post-conviction bail application filed by Israel Oladele Ogundipe, a televangelist, popularly known as ‘Genesis’ and the head of the ‘Genesis Parish of the Celestial Church of Christ’, Alagbado, Lagos.

Ogundipe was on Nov. 18 sentenced to a year in prison after being found guilty of the offences of conversion of property not delivered and stealing.

The televangelist, however, in a motion on notice for bail pending appeal asked the court for an order, admitting him to unconditional bail pending the hearing and determination of the appeal of his sentence.


Akinlade dismissed the application which was brought pursuant to Section 6(6) of the Constitution of Federal Republic of Nigeria 1999 as amended paving way for the convict to continue serving his sentence at the Kirikiri Correctional Centre.

In a 16-paragraph affidavit sworn by his counsel, Mr Olanrewaju Ajanaku which is in support of his bail application, the televangelist said he was suffering from diabetes.

He noted that he could not follow a strict diet and the constant specialised medical attention in custody and this has taken a toll on his health making him be gaunt in appearance.

He also noted that prior to his incarceration, he was suffering from hypertension, peptic ulcer and unending malaria which had worsened his health challenges since his Nov. 18 conviction.

The state in its counter-affidavit which was sworn by the prosecutor Mrs Rotimi Odutola prayed the court to refuse the application of the convict.

She noted that the trial had spanned several years and there was never a time the convict complained about his state of health.

“It is now he is alluding to facts about his alleged state of health now that he has being in custody for barely three weeks.”

“Indeed if his health status truly requires treatment,the correctional centres also have a procedure for referral where an inmate’s health case so demand without the prompting of anyone.”

However, ruling on the application, the court held that Ogundipe had not proved any special circumstances that could persuade the court to do so.

The judge noted that the Court of Appeal Practice Direction 2013 provides for quick hearing of criminal matters.

“The convict has not shown any medical records of his illness. Also he has not been to the prison hospital for treatment. So his appeal can be heard early by the Court of Appeal,” Akinlade said.

Ogundipe was was arraigned in 2009 for obtaining money by stealing, inducing delivery of money by false pretenses, unlawful conversion of property and forgery.

He was alleged to have fraudulently obtained between 2002 and 2005 the sums of N14million and 12,000 pounds in various tranches from a London-based architect, Mrs Oladele Williams-Oni who had approached him for spiritual assistance.

The judge had in the judgment ordered that Ogundipe should repay the complainant, the sum of N11million, part of the funds illegally obtained from her.