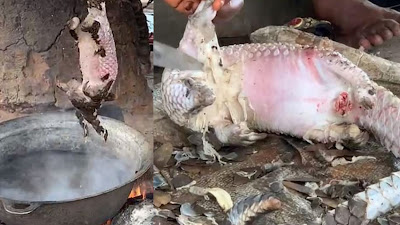 Shocking footage seen by MailOnline reveals the appalling state of Nigerian wet markets which have the potential to cause future disease outbreaks in humans.

Myriad animals including pangolins, primates and sea turtles are held — both dead and alive — in confined spaces while workers fail to sanitise surfaces or tools and do not wear appropriate PPE, including gloves.

Video also shows many of the animals being abused before they are slaughtered; photographic evidence reveals vendors boiling animals including pangolins, dogs and manatees while they are still alive.

The Huanan Seafood Wholesale Market in Wuhan is believed to be the site of the first outbreak of SARS-CoV-2, the pathogen causing the Covid-19 pandemic.


This is an example of zoonotic transmission where viruses jump from animals to people and experts warn bringing a wide range of animals into a small space alongside humans in unclean conditions is a perfect recipe for disease.

Malcolm Bennett, Professor of Zoonotic and Emerging Disease at the University of Nottingham, told MailOnline: 'If you were to want to maximise the risk of zoonotic transmission you would mix human contact with a wide range of animals — domestic and wild — and bring them together both alive and dead in the same area.'

WildatLife, a charity working on the ground in Nigeria, visited Oluwu fish market in Epe, 55 miles east of Lagos.

The volunteers secretly recorded conditions at the market where vendors handle, butcher and sell live and dead animals.

'Wet markets like Oluwo Fish Market located in Nigeria, facilitate and heavily contribute to the practice of illicit wildlife trade and in turn, this practice can lead to the spread of zoonotic diseases,' WildatLife told MailOnline.

'Transportation of animals for wildlife trade at these markets enables the spread of diseases from animals to other animals and pose a threat to human health.'

Dozens of primates can be seen in the footage stuck in small cages while snakes, crocodiles, duikers, sea turtles, manatees, rodents and parakeets are also present.

'All animals are infected with something and only some are infectious to humans,' Professor Bennett explains.

'Having more animals in the same space and in close contact with each other makes it more likely something will emerge in humans.

'The more biodiverse an area/country is (in the tropics for example), the higher risk there is that something is going to emerge.

'There is an almost 100 per cent risk of something emerging in humans, but we can't predict where that will be or what that will be.'