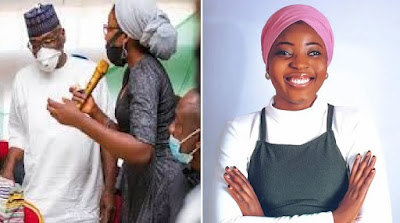 Her announcement is coming on the heels of her initial nomination as a commissioner in the state.

According to the statement by CPS, Rafiu Ajakaye, Kaosarah comes to the job with several certifications on youth affairs, including at continental level.

The appointment of Adeyi comes after controversy surrounding the inclusion of her name in a list of nominees for commissioner-designate.

Hours after Kwara state governor, Abdulrahman Abdulrasaq, announced the nomination of  Adeyi, a 24-year-old University of Ilorin Graduate as a commissioner, one of the proponents of the #NotTooYoungToRun law, Samson Itodo, faulted the nomination.

Citing Section 106 of the 1999 amended constitution, Itodo said the criteria for being appointed a Commissioner of any state in Nigeria is 25 years.

Adeyi, the youngest nominee in the history of the state and from Ilorin West, was part of the eight names initially read during plenary by the Speaker, Engr Danladi Yakubu Salihu.

However, another statement from the Media Team of the Speaker Tuesday evening ”acknowledged the receipt of seven commissioner nominees” with the exclusion of the name of Adeyi.