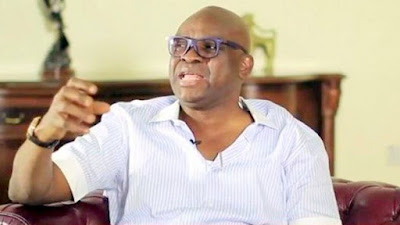 Sporadic gunshots were heard at the Zonal Congress of the PDP in Osogbo today as hoodlums attempted to invade the venue of the event.

Former Governor of Ekiti State, Ayodele Fayose was said to have been whisked away by security operatives in a black tinted jeep unhurt.

The Nation reports that the incident occurred around 6:45pm when some suspected hoodlums advanced towards the gate of the WOCDIF Event Centre where the congress was taking place in an attempt to invade the premises.

It was gathered that Fayose was about to leave the venue of the congress when the hoodlums attempted to invade it.

Osun State Commissioner of Police, Olawale Olokode and other officers were said to have intervened in repelling the hoodlums as they shot sporadically in the air to scare them away as Fayose was whisked away.

Earlier at the congress, Fayose settled his rift with Governor Seyi Makinde of Oyo State, as he now publicly accepted him as the South West zonal leader.

“Makinde is the leader and father of the party in Southwest”, he told the delegates.

Leadership tussle between Makinde and Fayose had heated up the zone, with the PDP NWC having to shift the congress from Ibadan to Osogbo.