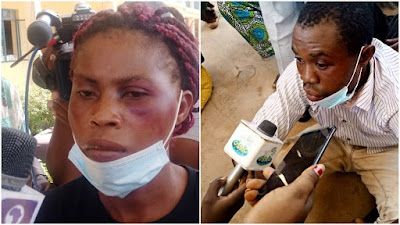 A 31-year-old woman has confessed on how her boyfriend made to sell her only child for N300,000 to a buyer in Imo State.

According to the woman, Titilayo Kudaisi, her boyfriend, Seyi Akinsete whom she met four months had been into the business of stealing and selling babies.

Titilayo, who was paraded alongside her boyfriend at the police headquarters in Akure, Ondo State capital, disclosed that after she sold her three-year-old male child, she went with Seyi to steal a baby at Ilorin, Kwara State capital.

The suspect stated that she was arrested with her boyfriend after traveling down to Ondo town, headquarters of Ondo West Local Government area of the state with the intention of selling a baby.

“We later sold my child to someone in Imo State for N300,000 but I could not get my child back despite his assurances. The father of my son is late.”

On his part, Seyi, a 33-year-old father of three said he was introduced into the business by his friend he identified as John Emeka in 2019.

Seyi revealed that the first baby he sold was that of his female friend at N500,000 through Emeka.

“In total, I’ve been able to steal three babies since I started the business. We used to sell them to our buyer in Imo State.The guy that used to buy the babies from us told us that he works with an orphanage home.”

Meanwhile, the Commissioner of Police in the State, Bolaji Salami said investigation had began into the case to unravel all those connected with the business.