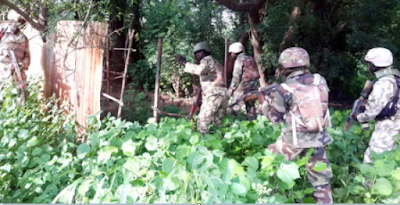 The Nigerian Army says it will henceforth take legal actions against citizens who share indiscriminate pictures and clips of slain soldiers on social media.

Army spokesman Mohammed Yerima in a statement on Tuesday said that the indiscriminate sharing of graphic pictures of soldiers killed in battle on social media was unpatriotic and utterly reprehensible.

He said the army’s decision to take legal action against indiscriminate social media posts is to protect troops who put their lives on the line to ensure that the country was saved from criminal elements from being ridiculed on social media.

“The Nigerian Army condemns in the strongest term possible, the indiscriminate sharing on social media of graphic pictures of personnel who paid the supreme price in the cause of defending and protecting the country from its adversaries,” Mr Yerima in the statement said.

“While the Nigerian Army and its personnel understand the nature of the noble calling and are ever ready to confront any danger of adversity on the way, what is most unfathomable is the glee with which some people share the gory pictures of officers and soldiers who are either killed-in-action or wounded-in-action in the media,” he added.

“One can only imagine the trauma and pain such families go through waking up to see the gory pictures of their loved ones splashed on the social media. The Nigerian Army consider this despicable and unpatriotic act totally unacceptable and will henceforth take legal actions to protect troops who die in action from being ridiculed on social media or any platform,” Mr Yerima warned.

This warning comes in the heat of growing attacks on security forces across the country.