Gunmen Attack, Kill Couple In Their Home In Ogun 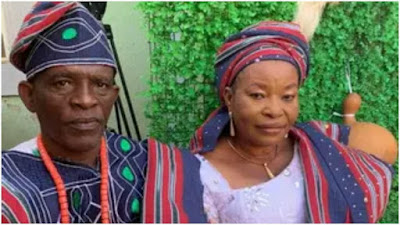 A hotelier in the Atan-Ota area of Ogun State, Kehinde Ibidunni and his wife, Elizabeth has reportedly killed by suspected assassins.

They were said to have been gunned down by some armed men, who broke into their home on Tuesday.

It was gathered that the gun-wielding men forced their way into the residence located at 15 Tella Ojo Crescent, Atan, through a burglar-proof, around 3am.

Dailypost correspondent learnt that a little girl living with the couple heard the noise first and ran to inform the hotelier.

However, when the man showed up to see who had broken into his home, he was reportedly shot in the heart and he died on the spot.

They were said to have thereafter got hold of the 54-year-old wife, stabbed and shot her dead.

A son of the couple, Olayinka confirmed that his parents were killed and their assailants “scattered the whole house, took the little money they could lay their hands on and left.”

He said the police had taken the corpses to the morgue, adding that arrangements are being made to bury the couple on Friday.

The Ogun State Police Public Relations Officer, Abimbola Oyeyemi, could not be reached as at the time of filing this report as calls and messages to his line were not responded to.