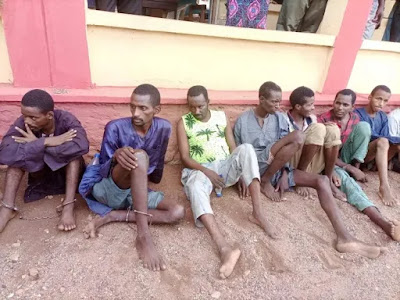 The students were kidnapped in front of their Mini Campus at Aiyetoro on the 14th of March 2021 and were later released.

Commissioner of Police, Edward Ajogun, while parading the suspects said when the command heard of the kidnap of the two students it intensified efforts towards their release.

“Fortunately, two days after, the students were released from the captivity of their abductors.

“The Command kept on trailing the syndicate using all lawful methods. In one week of the efforts, three members of the kidnap syndicate were apprehended.

“The suspects are: Babuga Abubakar, 40yrs; Umaru usman, Mohammed Bello. They claimed not to understand English or other languages except their Fulani dialet but confessed to have had series of kidnapping at Ayetoro, Olorunda, Imeko areas,” he said.

The commissioner said “the suspects also admitted kidnapping a female doctor and a nurse at Olubo Village along Abeokuta-Imeko road on the 7th of April, 2021 and also kidnapped one Mrs. Yemi Ojedapo at Olodo village, who painfully, they had to kill because she recognized them.”

Ajogun said Abubakar is the informant to this syndicate and several other kidnap gangs, as he supplied them information on victims to the gang for ease of operation.

On the kidnappers of the two female students, Babuga explained that the students were not the actual targets, but that a woman who is into wholesale recharge card in the area.

He also stated that it was Bello who invited his gang members for the kidnap of Mrs Yemi Ojedapo and masterminded her killing.

The phone they used in calling for ransom was recovered from them as exhibit.

Also paraded are another set of two members of kidnapping syndicate who were responsible for the abduction of Chief Tajudeen Omotayo, the Olori Ilu of Imope Ijebu on 20 March, 2021.

The two suspects Nura Bello, 21, and Abubakar Bello Amodu, 26 have confessed to a series of kidnap cases in Ijebu area. Other members of the gang are being trailed.

Other paraded suspects are Ogunnaike Phillip, 26 and Isiaha Onifade, 22, who robbed a POS operator, Rofiat Wahab of N238,850 and cut her with cutlass.

Recovered from them are the money, a POS machine and cutlass.