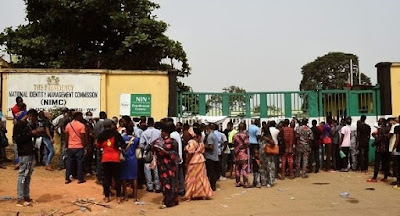 A mother of three and owner of a restaurant in Egbeda, a Lagos suburb, Sister Mary, said she paid N40,000 to get her three children and her four workers registered for NIN at a government approved centres in Alimosho Local Government Area (LGA) of the state.

“My brother, I have no choice but to pay. This country is in a sorry state. When I got to the place with my family as early as 5.25am, I saw very old men, pregnant women and teenagers, God knows if they slept there. The deal was N5000 per person. I paid because some of kids will use the NIN for their JAMB registration,” she recalled.

Another mother of four, Madam Esther Kokuma, a civil servant, said though she had heard NIMC come out to say registration for NIN is free but every where she had visited, cash was always demanded.

“For my two children that will be writing JAMB, I paid N5,000 to register for NIN at Ikola. When I told their dad about it, he warned me against going to pay because it was supposed to be free but the pressure from my kids became intense,” she said.

Two registration centres in Ayobo, a suburb of Lagos, also charge between N2500 and N3000 for registration for NIN.

In Ekiti State however, the extortion is minimal as only N1000 is paid for registration.

Temitope Adebayo said she spent N500 to obtain the form and N200 to collect the card when it was ready. She however said other people said they paid about N1000 to get theirs.

From Alimosho to Ikorodu to Surulere and other parts of the state, it has been the same tale of extortion.

The few centres where cash may not have been a sine qua non are those run by the telecom operators but they a very few and largely unknown to many subscribers.

Attendants at some of the registration centres insisted that their employers paid cash to the Federal Government obtain the licence and acquire the equipment to conduct the exercise. “So after investing to buy equipment, train staffers and pay for the licence, where does the government expect us to get the cash to run the business? You can see we are three working at this centre, at the end of the month we collect salary,. So the government is aware of the money we are collecting” she said on condition of anonymity.

Calls put to the two mobile lines of the spokesman of NIMC, Kayode Adegoke weren’t picked. The text messages sent too failed to elicit response.