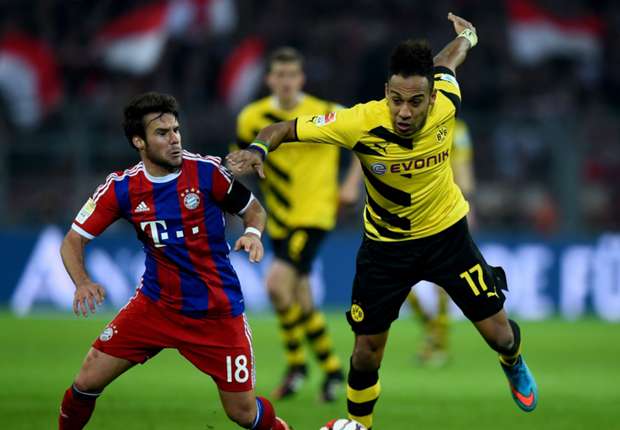 The striker is confident that BVB can derail the

provided they maintain their strong start to the

Aubameyang does not believe that reigning

champions Bayern Munich will win the

The Bavarians have claimed the last four titles

and are heavy favourites to make history by

becoming the first team to win five in a row.

However, with leaders Dortmund claiming

maximum points from their opening four

matches this term, Aubameyang believes that

"We have started the season well," the striker

stated. "Although everybody knows that Bayern

are favourites, as I said, and I am probably the

only one thinking this and others don't, I don't

think that Bayern will win the league this

season. At least, this is what I think.

"But we have to keep up for the whole season

and then we'll see how the season will shape

up at the end.

"I think that we have started very well. It's good

that we have managed to achieve this winning

streak. We'll have to continue playing as we

know and try to win."

his name this season, having been given a

coach Thomas Tuchel, and the Gabon

international believes that there are plenty more

"I want to score 20 goals in the Bundesliga this

"That's a target I want to achieve. I have a bet

achieve this goal because I want to improve.

"It's not really a bet but at the end of the

season I will show you something. I will have

something to show but only at the end of the

"[Tuchel] has managed to make me feel at ease

from day one. He gives me the confidence I

need. He talks to me a lot. We speak in English

but it's good for me to talk with him.

"We have many exchanges and we work a lot

on this, on the videos and we do all this kind of