Two Nigerian men living in Sharjah, the third largest city in UAE after Dubai and Abu Dhabi have been arrested after UAE police raided their apartment and recovered a large number of fake $100 bills. 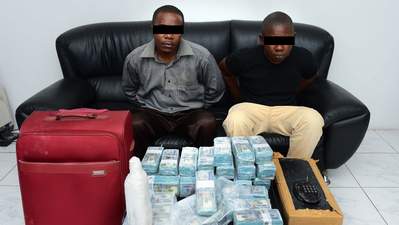 A senior police officer said the culprits used the fake currency to convince people that they could double their money and make them rich. The two men, reportedly, used to meet people in an apartment in Sharjah and convince them that they had the ability to double money.

received a tip off about the scam activities of the two suspects.

A team of CID officers verified the complaints and raided their apartment. The suspects including A.Y and R.N were arrested red-handed with the fake currency. Tools and bags used in the operation were also recovered from them.

The police said two of the suspects are in the UAE on a visit visa. The police has referred the case for public prosecution.