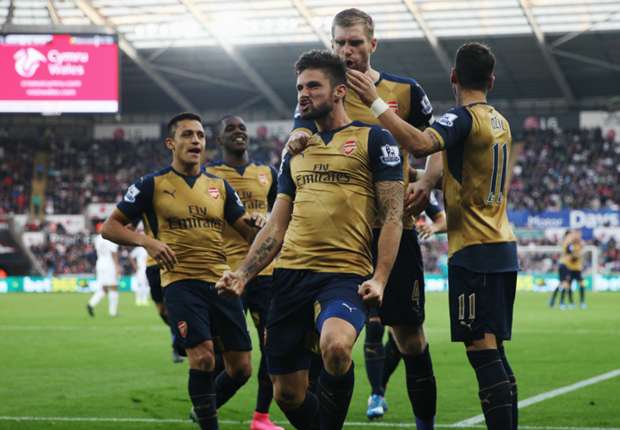 The French striker asserted that the victory on the road in south Wales was a positive experience ahead of their meeting with the Bundesliga power houses. Olivier Giroud believes Arsenal's 3-0 Premier League win over Swansea City will play a key role in their vital Champions League trip to Bayern Munich on Wednesday.

Arsenal scored all three goals following the interval as Giroud, Laurent Koscielny and Joel Campbell all found the back of the net at Liberty Stadium on Saturday.

Giroud, who has been drafted back into Arsene Wenger's starting line-up following Theo Walcott's injury, netted his seventh goal of the campaign in the away win and was impressed by the team's patient display.

"It was definitely a good win," he told Arsenal's official website.

"We needed this win before the big game on Wednesday. We started slowly but we were creating chances to score. We needed to wait until the second half to put it in and to score three goals and even more, get another clean sheet.

Swansea had won the last two meetings between the sides and France international striker Giroud believes the initial struggle to break down their opponents could prove a key experience ahead of their European challenge.

"We needed to change that [record]," he said.

"We had two difficult games against Swansea and to play here and, as I said, it was not easy in the first half but we succeeded to play our game; more in between the lines with more technique and we were efficient up front and at the back as well.

"We are really pleased with this game so hopefully we can win the second leg [against Bayern Munich] as well."