Protect me from Melaye, Tinubu’s wife begs IG of Police 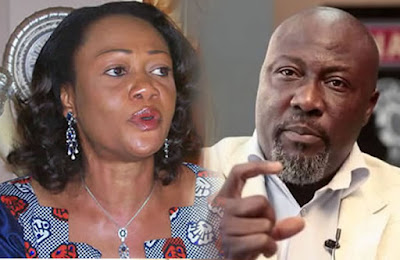 In the petition which was addressed to the acting Inspector-General of Police, Ibrahim Idris, and dated July 18, 2016, the senator, who is the wife of the National Leader of the All Progressives Congress, Asiwaju Bola Tinubu, said Melaye threatened her life on the floor of the Senate last week.

She said Melaye had a penchant for violence as he had engaged in fisticuffs with his colleagues when he was in the House of Representatives between 2007 and 2011.

The complainant alleged that a particular lawmaker had even died after being beaten up by Melaye.

She, therefore, urged the IG to protect her from harm.

The petition with reference number SOT/Vol.2/135, read in part,

“I am Senator Oluremi Tinubu, representing Lagos-Central senatorial district of the Federal Republic of Nigeria.“During the proceedings of the Senate on Tuesday July 14, 2016, I had cause to contribute to a matter of national importance. Apparently dissatisfied with my contributions, Senator Dino Melaye threw caution to the wind, resorted to vulgar abuse of my person and wanted to assault me.“It was the timely intervention of a number of my colleagues which prevented Senator Melaye from unleashing physical attack on me. However, as the leadership of the Senate did not call him to order (sic) in the circumstance, he proceeded to threaten my life without any provocation whatsoever.“In view of Senator Melaye’s antecedent, particularly in the House of Representatives, where a brawl led by him had led to the untimely death of a member, I have decided not to ignore this threat to my life. Therefore, I am compelled to urge you to use your good office to provide me with adequate security.”