Photo: Ghanaian bride poses for mugshot in her wedding dress 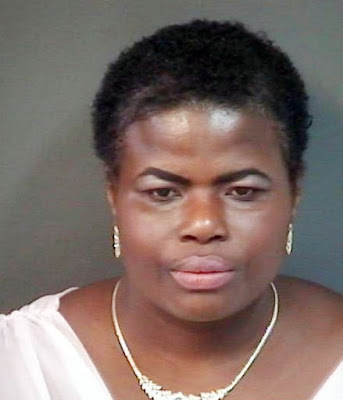 Instead of posing for happy snaps with her new husband, she is pictured above in her wedding dress and finest jewellery at a police station.

Home Office officials had dramatically swooped on the ceremony and arrested Siaw over immigration offences. She has now been jailed for six months.

Portsmouth crown court heard Siaw, of Portsmouth, overstayed her leave to remain in the UK and

Siaw, a qualified teacher, entered the UK in 2009 legitimately but the Home Office refused to extend her leave to remain in 2013.

Siaw, who was also studying at the University of Portsmouth, forked out £5,000 to a man she didn’t know on a train for a ‘leave to remain’ identity document which was registered to an Indian man.

She claimed the man who sold her the document said he worked for the Home Office.

However, Siaw, who worked as a healthcare worker looking after vulnerable people after studying for her master’s degree, was exposed when she used the fake document at work.

The Home Office were able to spot the discrepancy and swooped in to arrest her on June 22.

“At interview she claimed she bought the document from a man on a train in circumstances which must have alerted her to the document being either false or improperly obtained.“I say that because the man from whom she bought the document, she says, claimed to work for the Home Office and the defendant said she paid £5,000 for a leave to remain document.”Siaw admitted one count of possession of an identity document with improper intention and one count of knowingly remaining in the UK beyond the time limited by leave to remain.