A police officer in Sweden has become a viral star after a photo of her taking down a thief was posted online. 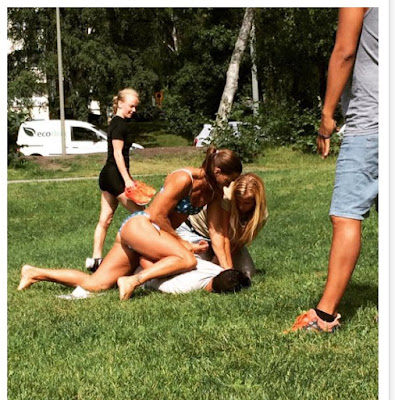 According to The Local Sweden, 11-year veteran Officer Mikaela Kellner was off-duty and sunbathing with her friends when a man approached them and said he was selling magazines to help the homeless.

Officer Kellner grew suspicious of the man after the group declined to purchase any magazines and he refused to leave them alone. After the man finally left the area, one of Kellner’s friends noticed her

That’s when Kellner — wearing only a bikini — sprang into action. She and a fellow officer took down the suspect and called for backup, according to the report.

"I just acted on instinct and didn't think about it so much until after we had pinned him down. When I sat there I looked over at our other two friends who are not police officers and realized that it probably looked pretty funny. But I would have stepped in no matter my outfit," Kellner told the publication.