A Manager at a second generation bank, First City Monument Bank (FCMB) Plc, Mr. Olisa Nwakoby on Friday evening shot himself dead in the presence of his Priest at the Lekki area of Lagos Island, Lagos State. 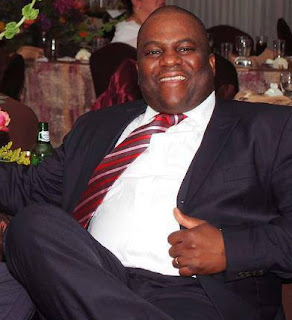 The father of a 10-year- old daughter was said to have taken his own life because of an incriminating huge loan transaction he approved in his bank.

neck of Olisa to get the money back.

His late father, Chief Patrick Oguejiofor Nwakoby was a former chairman of First Bank of Niger Plc, a successfully lawyer , politician and a highly respected community leader before his death.

Fear over his integrity and the name of his family, which could be dented if his bank commences action against him over the loan, was too much for the vibrant banker to bear prompting him to shoot himself, New Telgraph reports their source told them.

Our source did not say that there was suspicion of any foul play in the death of the banker, she also could not confirm the actual amount involved in the transaction, but she simply said “it was huge.” The case is being handled by homicide detectives attached to Area J Command, Lekki/Ajah. According to a police source.The banks, on the fateful day he killed himself, went to meet his pastor. He told the pastor to tell his wife to take good care of his children, that what he would do in next few minutes would shock everyone. He was said to have later blown his brains out.

“It was later discovered that he took money from the bank, N350million, and the money started creating problems for him. He killed himself.When the Lagos State Police spokesperson, Dolapo Badmus, was contacted, her two lines were switched off.

Olisa hails from Nkwelle Ezunaka in Oyi Local Government of Anambra State and he attended Abia State University, where he bagged a Bachelor of Science (BSc) degree, in Microbiology between 1990 and 1995.