Suspected Cultists Say They Were Tricked Into Cultism Through Birthday Parties 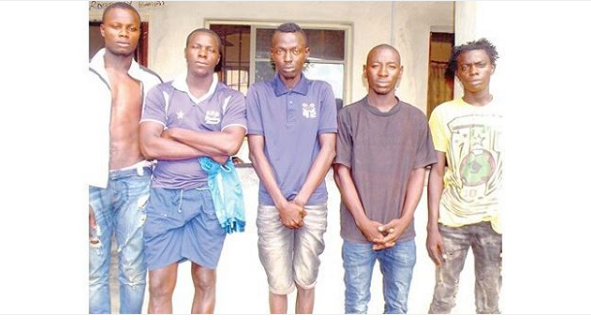 They explained that when they discovered they had been tricked and initiated against their will, they thought of running away, but realised it was like running away from ones shadow.

They urged young Nigerians, to be wary of friends and avoid accepting birthday parties’ invitations.

One of them said: “If you don’t go for operation or cooperate with them after initiation, they would kill you. I can tell you that every one of us here, were tricked into becoming a cult member. It was never our wish.” The suspects were arrested after they allegedly started shooting sporadically on July 16, 2016, at Ilaje, Ajah, around 7pm.

A police source said: “They went about on two motorbikes, snatching money from people and shooting sporadically.” Six of them were arrested, Ayobami Ahmed 20, Balogun Ahmed 22, Olayinka Agbeto 35, Kunle Odeyemi 29 and Lekan Adekoya 26.

When they were taken to police station, police discovered they and four other suspected cult members, Sylvester Bibra 34, aka Gardafi, Dare 27, aka Shokey and Michael Ojintan 20, earlier arrested, knew one another. They all belonged to the same Aiye confraternity.

Police are presently hunting for Ogbowon, Dammy, Segun Okondo, Lekan, Ijooba, Jungle, Bariga, Biggy, Idris, Jelili, Corner Stone, Lawal and others. It was also discovered that some of these cultists, are part of those that had been terrorising Ikota Community.

He made a call and a commercial bus, filled with men, came to pick us. I thought they too were going to the party.

After driving for a while, one of them suddenly brought out a black band and blindfolded me. I was scared. I thought they wanted to kill me. The bus drove off again. I started crying and begging them not to kill me. They ordered me to shut up. They said if I cried, made a noise or beg, they would shoot me.

They took me somewhere, pulled off my clothes and started beating me. They later bundled me back into the bus. “When they removed the blindfold from my eyes, they told me I had become a member of Aiye confraternity. I was angry with my friend. I didn’t ask for it. Why did he do that to me? I didn’t want to participate in any of their operation, but I was told I would be killed if I refused.” Ojintan said that for reasons he couldn’t understand, members of the gang started picking on him. They would swoop on him and take anything of value with him. It was through that gimmick, they collected five phones from him.

The phones were collected at different times. One day, one of his persecutors, invited him for a birthday party.

He turned down the invitation. Ojintan recollected: “He told me that if I didn’t come to the birthday party, they would continue to collect my phones. I decided to go with him. At Ajah Roundabout, they blindfolded me with a black band.

When the vehicle stopped, they dragged me down, pulled off my clothes and started beating me. They told me that they were making me their member. When I got home, I couldn’t tell my father, but I told my boss. He told me to be careful. I tried to avoid those friends. I was still avoiding them when police came to arrest me. I have never gone on any of their killings or operations with them.” Agbeto on the other hand, denied being a member of any cult. He said he is married and has two kids.