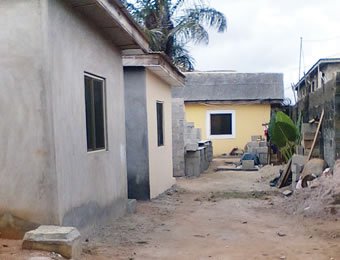 Lagos Metro gathered that the victim allegedly blamed her grandma for her death in a note which she left behind.

The elderly woman was arrested after Saka’s boyfriend had reported the case at Igando division.

A source explained that Saka was taken to her grandma’s house in Mofoluwasho Close to live with her after the death of her mother because she was the only child of her parents. Saka’s mother died

when the victim was only three years old.

“She had been living with her since then. The woman is a trader in Ikotun market and that was how the girl met with a guy whom she started dating. Whenever the woman was not around, she would bring the man home and he would spend the night with her.”Another source disclosed that the woman was not pleased with the news that Saka was pregnant so, she insisted she packed out of the house.

“The grandma insisted that she moved out of the house to her boyfriend’s house. The woman packed her luggage outside the gate and the girl angrily left the house, took Sniper and drank it,” he said.Residents said the victim began foaming in the mouth at her boyfriend’s house and was rushed to the Igando General Hospital where she was confirmed dead.

When the boyfriend saw the suicide note, he was said to have reported to the police.

“The girl and the boyfriend loved each other. The man did not even reject the pregnancy. It was from the suicide note that the boyfriend saw that the girl accused her grandma of causing her death. He reported to the police with the note in his hand.“The Police took the suicide note and arrested the woman. She was in tears at the bus stop as she kept saying she didn’t mean her any harm. It was a sad sight,” another resident said.A resident, who identified himself as Goddey, appealed to the government to intervene in the increasing teenage suicides in the community.

She said Saka’s corpse had been deposited in a mortuary.

“Her corpse has been deposited at the hospital’s morgue for autopsy. Investigation is still ongoing,” he added.Source - Tribuneonline