Husband Of Deaf And Dumb Woman Use Own Children As Sacrifice 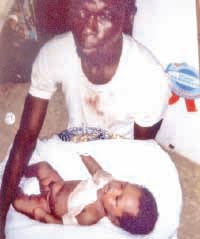 Thirty-five-year-old Thomas Matthew has told a horrific tale of how his father, who he claimed initiated him into an occult group, appeared to him and told him to sacrifice his children to him.

In response to the demand, Matthew strangled his two-month-old son, John Matthew and four-year-old daughter, Mary Matthew at different times. But his attempt to also kill his first son, Josiah Matthew, who is nine years old, backfired.

The horrendous acts were committed in Mountain village opposite Dantata Camp, Asokoro, Abuja.

As Sunday Sun learnt from the Commissioner of Police, of the Federal Capital Territory Police Command, Mr. Mohammed Mustafa, the suspect, Matthew strangled his daughter, Mary, inside his house on October 7, 2016, after beating his wife, Bola, who is deaf and dumb and chasing her out of the house.

In a brief interaction facilitated by a sign language expert, the wife who is deaf and dumb recalled how the husband had tried to kill their first son. She said: “I didn’t know that my husband is a cultist. I remember when he first tried to kill our first son, I reported the matter at the Garki Police Station. It was my mother who took the boy away from the house and he is still staying with her in Mararaba, Nasarawa State. Then I had another son last year. When he was two months old, he became sick. My husband killed him in September 2015. I didn’t know until he confessed. This year I had our daughter. In the night of October 7, 2016, we were together in the house when suddenly he started beating me. I got injured and ran away to his elder sister’s house. Before I came back with his sister, he had strangled our baby to death. He locked the door and ran away. It was policemen from Asokoro Police Station, where I reported the case that broke the door and found the baby. We rushed the baby to Asokoro General Hospital. The doctor said the baby was dead. Now I have only one son left, Josiah Matthew. It was only God who saved me from the power of darkness.”When he spoke with Sunday Sun at the headquarters of the Criminal Investigation Department of the FCT Police Command, where he is being held prior to arraignment in court, Matthew corroborated what the wife said and made other disclosures in explanation of what drove him to commit the alleged heinous acts.

His words: “I got married to my wife, Bola, and we were blessed with three kids. My father is a cultist and he initiated me into the occult. My father asked me to offer the children as sacrifice and mark of honour to him, promising he would make me become rich.

“It was a covenant that nobody knew, even my wife. My father gave me conditions that if anybody got to know or I revealed the covenant, that the covenant would be destroyed. From the time I had my first child, my father began disturbing me to offer my child to him as a sacrifice.Matthew who hails from Kwande Local Government Area, Benue State, further said: “I tried to kill my first child by strangling, but my wife caught me and reported to the police and her mother came to take the child away from the house. He has been staying with her in Mararaba, Nasarawa State.

Later my father appeared to me after I had my second son, John, who became sick. I strangled him to death in 2015. On October 7, 2016, my father appeared to me again that I should kill my only daughter. I was with my wife and then I started beating her and she ran away to my elder sister’s house and I locked the door and strangulated my four-month-old baby girl and she died.

I locked the entrance of the house and ran away. It was the youth in my area that arrested me and handed me over to the police. I wanted to kill my younger brother according to my father’s instruction. My father is still alive and he is in the village in Benue State.”The police commissioner assured that the suspect would be charged to court soon.